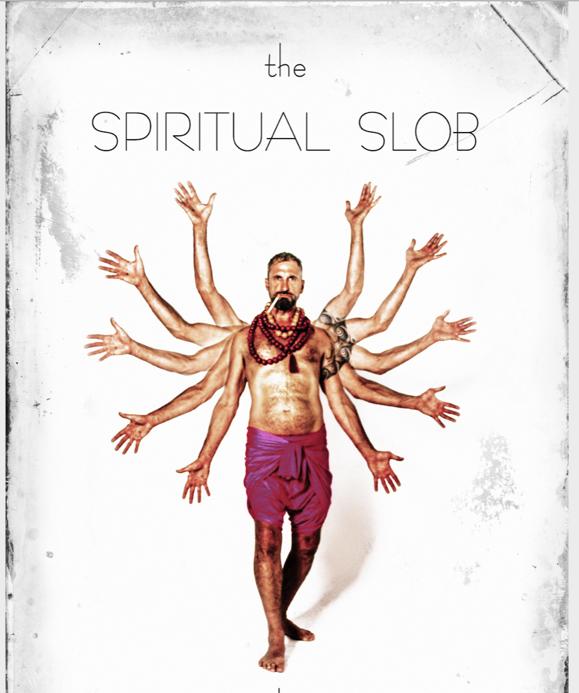 THE SPIRITUAL SLOB IN PODCAST

We are at last episode of the podcast of Gregg Masuak which explains us how to become one Spiritual Slob you have to really act and not just learn a series of notions and behaviors. So let’s listen to his latest advice in this Zone out! You will hear the episodes of The Spiritual Slob again soon in the programming of our Web Radio with other new programs that will start in the first weeks of October.

It is almost time to draw conclusions The Spiritual Slob , we have in fact arrived at the penultimate episode of Gregg Masuak’s podcast which helped us to find a reference figure that for simplicity we can call God from the world around us, indeed the God of our little world , we can find it in ourselves, concept close to Buddhism, so we have nothing to complain about in our life because we are the only ones piloting it . I’ll give you a preview: from October you will be able to listen to all the podcast episodes on our web radio together with new podcasts in Italian, English and Spanish, for now, which will complete the Polyglot Radio program still in the experimental phase. I leave you with Gregg!

Episode 24 of The Spiritual Slob , now almost at the end of our journey which began several weeks ago with the advice suggested by our anti-guru Gregg Masuak to clean with a vacuum cleaner. Well today let’s go deeper and let’s empty our drawers , sometimes containing things strangest and most useless in the world …

Today’s episode of The Spiritual Slob it’s about the creatures that live in the house around us, some desired, like cats and dogs and others not, like mites that after only 3 weeks populate the cushions of our sofa. These presences can for sure create energy imbalances in our life and beyond … even allergies or similar problems that are annoying to say the least.
Let’s find out together in this episode.

Another Case Study in the The Spiritual Slob podcast by Gregg Masuak here today to tell us how the fulcrum of a home many times it also represents the heart of ours personality , for better or for worse, I leave you with Gregg Masuak who this week also awaits you in 20Hits the 20 most programmed albums of the week on Polyglot Radio, the first web radio multilingual.

Welcome to the 21st episode of the podcast The Spiritual Slob from the homonymous book and audio book by Gregg Masuak since last Saturday too conductor every 2 weeks of 20 Hits, the ranking of Polyglot Radio in English every 2 weeks. Today he will tell us about crystals and obsession that stones can lead to and the good luck charms we often surround ourselves with, unfortunately, unnecessarily.

Listen to the twenty-first episode
Download the 21st Episode

In the 20th episode from The Spiritual Slob there is still talk of excrement… so it will surely bring us luck! But the topic told by our author always with unpronounceable puns is not really luck, but what we carry with us with our life : even a wrong career or a wrong color can be accompanied by “excrement” seen as negative energy , so we have to be us to change our destiny and to leave singing a song and enjoying a beautiful sunny day.

This 19th episode from The Spiritual Slob it could be defined summary of everything that has been illustrated so far by our anti-guru but with one more element: heart and love which should characterize the essence of the highest systems, let’s say more simply the main religions which should forever cancel the use of weapons and explosives. And then a reference that I like to mention the Taj Mahal the mausoleum of immortal love built by an Indian emperor after his wife’s death to keep his love for her forever, which is also considered junction point between the material and spiritual world , but let’s hear Heart You from the voice of Gregg Masuak.

Welcome to the 18th episode from The Spiritual Slob , the podcast of Gregg Masuak that today makes us peek inside his wardrobe: how many things can be understood and discovered about the life of only someone looking inside the closet . Maybe ours mental order it can also start from there, how? Fixing it e throwing what we no longer wear or that we may never have worn!

We are at 17th episode of the Podcast The Spiritual Slob by Gregg Masuak where once again we talk about the world around us that we build ourselves and from which we should start to clean up around us. Very often even one apparent perfection and, a maniacal order can hide a real one underground chaos which manifests itself as total energy disorder in our life. But let’s listen to this other case study, the story of Sheba from the voice of Gregg Masuak.

Welcome from Michele Mariotti to the 16th episode by The Spiritual Slob. You don’t know … what we do not know or what we are not aware of about what surrounds us, inside our house, our shell, between our daily actions … Gregg tells this time a significant episode : not always being hosted by someone even in extreme conditions could be enjoyable . Let’s hear then what his advice is for improve things and above all energy around us!

And we are at the 15th episode of the podcast narrated and written by Gregg Masuak , I am Michele Mariotti and I will give you a brief introduction in Italian of today’s episode. If one of the teachings of this book is to carefully observe the behavior of those close to us to draw important conclusions , one of the things that all mankind has in common is, and we say it in Latin to be a bit refined, the defecatío , let’s hear it directly from Gregg’s voice.

Here we are at 14th episode of the podcast produced by me and narrated by Gregg Masuak who this time tells us one of the most compelling stories and terrifying from his book: just the thought of this chapter makes me shiver. Convinced by a friend, he joins an expedition of Ghost Busters in a famous one Bel Air Villa in which at the time a well-known character from American cinema lived with his family. But we do not give any other details and we enter with Gregg in his compelling, real and incredible story.

In the new episode of The Spiritual Slob our author demonstrates a great skill with Puns , often almost impossible to pronounce. This is another case study, which starting from the base of the Zodiac signs will tell us a story in which the protagonists interact with each other by literally bouncing on their lives in a game of energy exchanges. Eventually the concept of to clean around him to avoid many problems this time in the metaphor of clean your glasses … and whoever does it often, raise your hand! But let’s hear the story in its entirety told by Gregg Masuak .

This week another case study in The Spiritual Slob, one of the longer podcast episodes that Gregg talks about Butch a rather ambiguous character than behind his uniform of perfect man in a suit and tie hides a lot of soul Slob … Let’s find out together in this new episode.

Welcome to Chapter 11 of Gregg Masuak’s The Spiritual Slob today Michele Mariotti , audiobook and podcast producer will give you a anticipation on this new concept. This is the first case study , where Gregg will tell us a fact this time about individuality and family : at the same time he will talk to us about the very uselessness of case studies in the Self Help books. Let’s try to better understand this seemingly contradictory concept in this episode.

This is a somewhat particular episode tenthof The Spiritual Slob podcast. If Gregg hasn’t already wowed you in the top nine, he surely will now. If you entered a room and found it on the floor a lifeless person, what would snap into you? What attempts to give an explanation to this scene would set in motion the your mind ? Let’s hear it in this episode from the voice of Gregg Masuak .

The Spiritual SlobEpisode 9 – on Polyglot Radio

The theme of this episode is: Suspicion. What makes us move in one direction or the other, which gives us the ability to make important choices, to escape from unpleasant situations and also gives us the opportunity to choose the right book or as in this case, the right podcast. Let’s listen to Gregg in the new and ninth episode.

So far we have listened to very short episodes that have been introductory to the real Masuak thought. In this episode we go a little more into his philosophy by dedicating the entire chapter to just one reason “ Here’s how it works! “. The main concept is a powerful concept, namely that each of us is … God is that God is in everything around us , therefore perfection does not exist … Let’s find out why in this eighth episode .

Life changes all the time and sometimes it can really do “ crap “… but also with the courses of self-help money is spent, yet we are sure that results will be obtained? We doubt it! Gregg’s solution, our anti-guru par excellence, is as always the “ vacuum cleaner “! Let’s hear how and why in this seventh it’s curious episode .

After the basic principle, the passage suggested by Gregg in The Spiritual Slob it’s a awareness that makes us think about how things in life, they can change in one breath. This is why it is important to always have some sort of ready inventory of what is around us and be aware, that it is for better or for worse, ours emanationthe. So if something goes wrong we have to understand what it is and clean it up promptly. Let’s listen to it in this sixth episode with a specially written background music.

Very short but intense episode that of The Spiritual Slob of this week. What are we talking about? Of the fact that we are all the reflection of a pattern much bigger than it is above us. An idea universal which is also one of the main ideas behind Masuak thinking. Let’s listen to it together to find a new world view in this fifth episode by The Spiritual Slob.

The Spiritual Slob of Gregg Masuak is the podcast extracted from the book in which Gregg leads us to sarcastically understand what is true and false in self-help books! In this fourth episode he introduces us to a key concept of his critical thinking: the Vacuum cleaner !
Let’s hear what he has to tell us in this fourth episode.

The Spiritual Slob in podcast by Gregg Masuak is the podcast extracted from the anti-guru’s book in which Gregg leads us to understand in a sarcastic way what is true and of fals or in self-help books! In this episode Gregg tells us a moment very intimate of his life, perhaps just when it was conceived the idea of the book The Spiritual Slob . Let’s hear it in this third episode .

The Spiritual Slob in podcast by Gregg Masuak comes back with the second episode.

There is nothing more boring than a book self-help ! In this episode Gregg ours anti-guru , will try to connect with the listener in a deeper way, trying to give gods advice even closer to your habits.

Let’s hear it in this second episode and let us be inspired.

The spiritual Slob in podcast is the new podcast taken from the book by Gregg Masuak, which later became Audiobook.

Director and writer, Gregg Masuak returns as a guest on Polyglot Radio with a podcast of his own. He tells us how to be able to clean up around us to bring out ours Inner God . Let’s listen to the first episode !